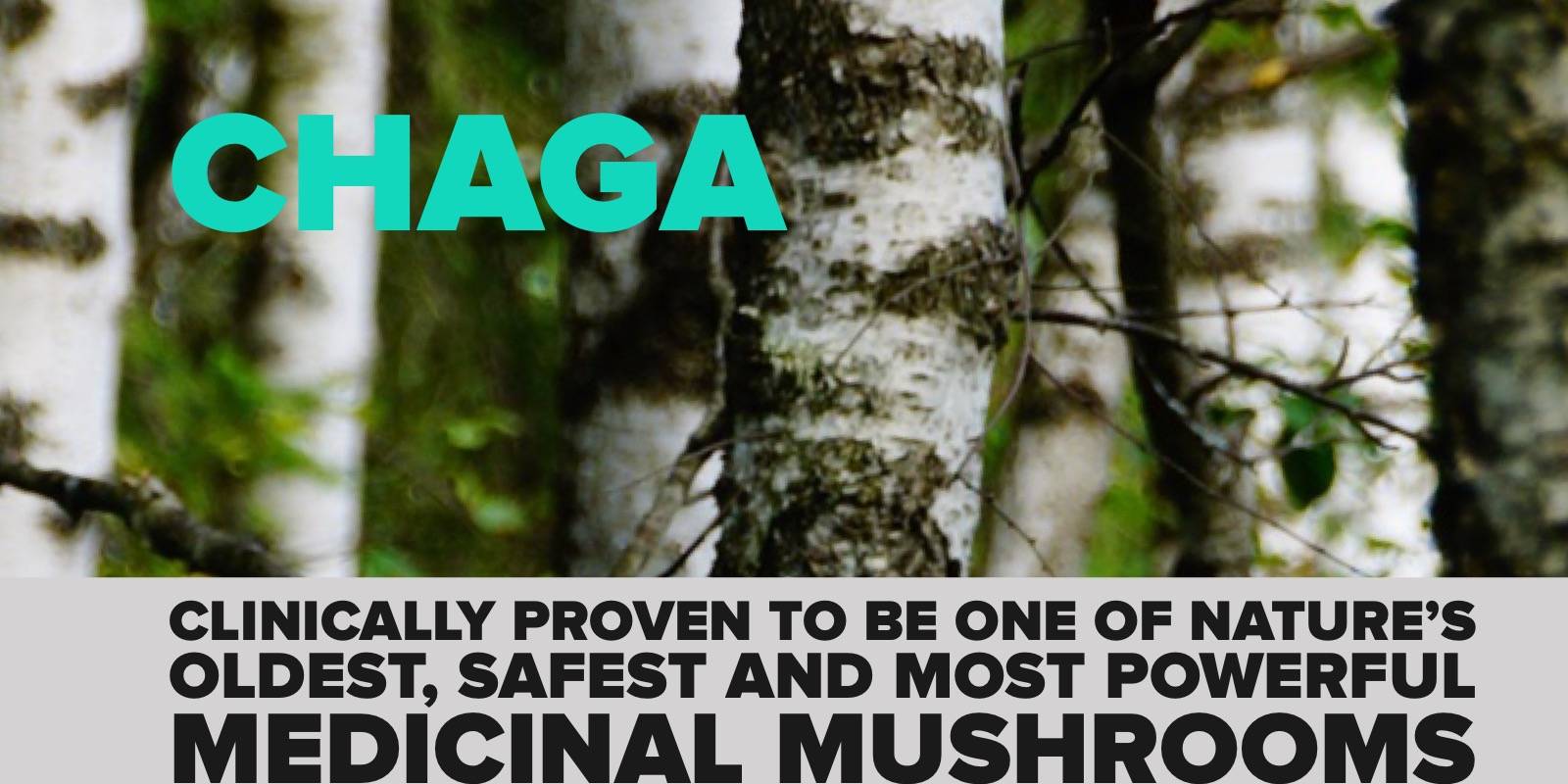 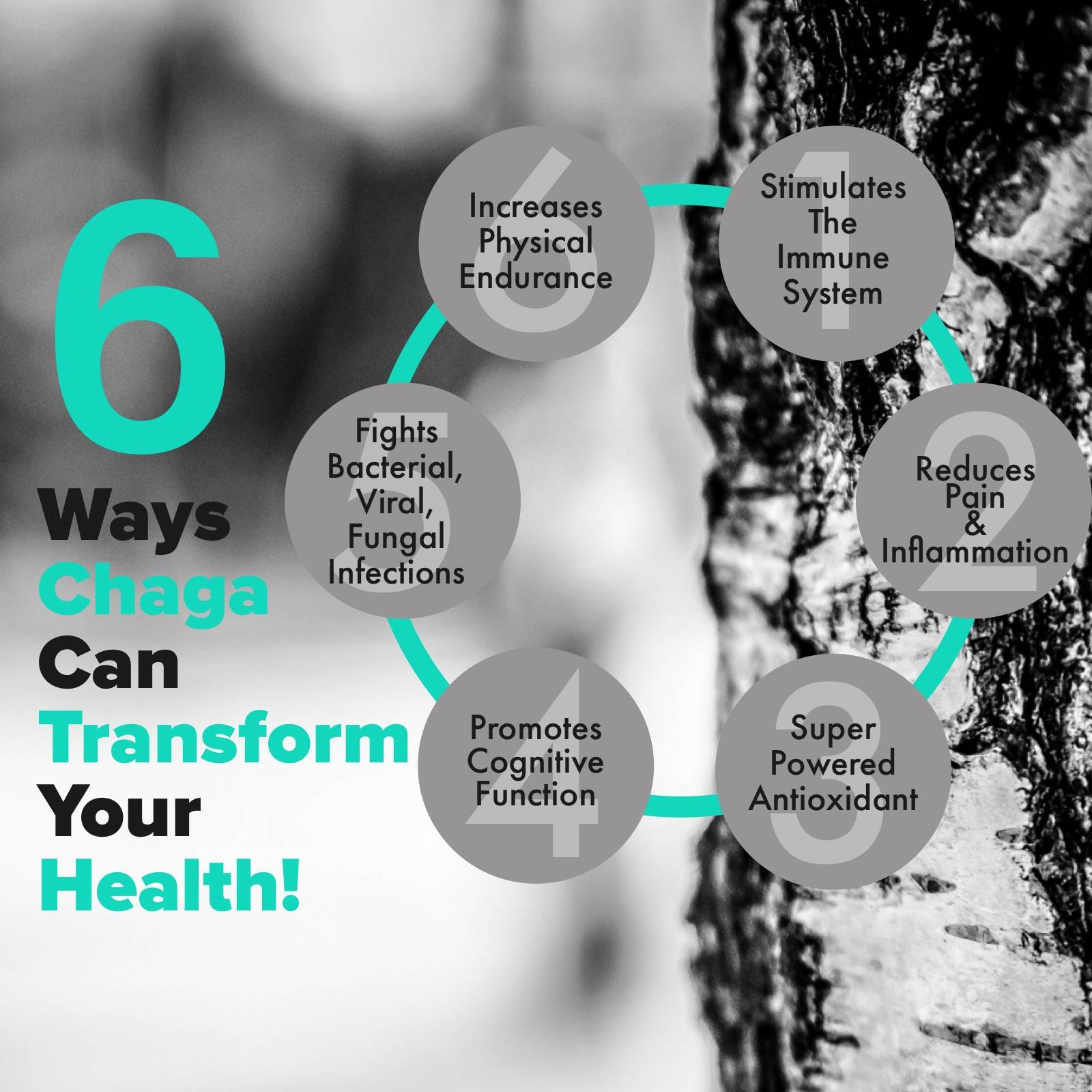 Chaga Mushrooms have been used in medicine practices and ceremonial gatherings since the 11th century in parts of Siberia and Russia. Beginning as a normal to use aly, the wonders of the Chaga Mushroom spread throughout the northern areas. Folk medicine adopted the practice of using Chaga from North American Tribes, in many cases to treat bacterial infections.

If you have hawk like eyes, you have the ability to identify Chaga Mushrooms. In a mundane location, Chaga Mushrooms can be found in widespread Northern areas like your backyard. Spotted on common birch trees, Chaga Mushrooms grow in a cancerous fashion. Appearing as a charcoal burnt growth protruding from different areas of the birch tree, these dry conk like mushrooms are harvested and used for a widespread scale of benefits. Referred to as the King of Medicinal Mushrooms,Chaga Mushrooms have the medicinal properties to help strengthen and heal the body naturally.

Also described as a Superfood,taking daily doses of our Chaga Extract has undeniable health benefits. Being able to strengthen the immune system with its super antioxidants, Chaga acts to also fight against our irregularly functioning cells.

What People Say About Chaga!

"I’ve now been taking Chaga 3x extract for about 2 1/2 months for my fibromyalgia pain. My pain continues to be under control most of the time. My flares are less severe and shorter lived. Last week I traveled and forgot to take my chaga. Big mistake...the other day I was exhausted and felt like I’d been hit by a bus. Then it occurred to me I hadn’t taken my Chaga in over 2 days. After a full day back on it I started to feel more energy and the pain subsided. I can’t say enough good things about Dave’s product."

"I decided to try chaga for 2 of my health issues. It’s only been less than a week and I am surprised at what it’s already doing for an issue I wasn’t even expecting it to help with. I have neuropathy below the knees and very little feeling. I now have more sensation in my legs and normal temperatures in both feet!"

"I was having awful tension headaches, neck pain, back pain, and chills. I wasn’t able to sleep or function well at all. I couldn’t get off the couch or open my eyes some days. I was constantly nauseous and losing weight. I’ve always had anxiety and it was through the roof. I was so miserable and exhausted. I have 4 kiddos and it was hard keeping up with them and their schedules. I’ve been using the 3x Chaga Extract for three weeks now and feel AMAZING! I haven’t had a headache or neck pain in a week and my energy levels are through the roof. I haven’t felt this good in years. I sleep good (never happens for me), my focus and mental clarity is back and I’m enjoying my favorite time of the year without pain! I cannot tell you how grateful I am for this product! Thank you, David. I feel like a new person, honestly!" L. Etta

Yesterday was the last day of the first week. I had what I thought would be a horrible flare. I thought this because the symptoms that usually happen during one occurred; these include swollen lymph nodes, fatigue, etc. When I have this occur I usually have unbearable pain. This time the pain was barely discernible. Looking forward to seeing what week 2 brings.

Disclaimer: These statements have not been evaluated by the FDA. They are for educational purposes only and are not intended to diagnose or treat any condition. Please consult your health care professional with any health-related concerns.

Sign up to get the latest on sales, new releases and more …